A night foretelling a new start.
Launch of the nihonbashi β, creating the future of Nihonbashi.

A night foretelling a new start.
Launch of the nihonbashi β, creating the future of Nihonbashi. A joint project, nihonbashi β, has finally been launched to connect young creators and the town of Nihonbashi. As the first in its series, the event invited creators who continue to take on challenges in their respective industries as instructors. Furthermore, together with the famous stores in Nihonbashi, workshop programs were held to create a new experience in Nihonbashi. The set theme was “Mirai-no-Noren (future of traditional Japanese store curtains),” decided under the concept of “designing the future of Nihonbashi.” The young creators were to create a noren (traditional Japanese store curtains) for stores in Nihonbashi over the course of about 4 months. This article highlights the launch event that was held on July 31st at the WIRED CAFÉ News Nihonbashi Mitsui Tower Branch.

Connecting the Future from Where People and Things Come and Go

The nihonbashi β event held this time was also a project intended to think about the Mirai-no-Noren as well as for the city and the creators to grow together by putting those ideas into shape. Within the time frame of about 4 months, the creators had numerous discussions at the Idea Workshops in teams. The lecturers also conducted three noren creation check for each team. Of course, during such processes, creators would utilize various communication tools to further discuss the topics.

The Norens created from this workshop will be displayed at the “Mirai-no-Noren Exhibition” planned to take place during early November in the following stores: the Coredo Muromachi, the Ninben Nihonbashi Main Store, the Mandarin Oriental Tokyo, and the Mitsui Garden Hotel Nihonbashi Premier. It can be said that this project is something worth working on for the participants and the stores.

The launch event was held as a meet up for the selected creators by the public invitation, creators who will become the lecturer, and the stores, as well as to relearn about the town of Nihonbashi and to create common understanding within the participants. By learning about the history and the features of Nihonbashi where many of the stores hold up norens to this day, they are able to create a product that matches well with the environment.

Sixteen creators were selected for the event. The creators included designers, directors, planners, and other occupations; a quite an interesting balance. The venue was full with the creators who joined as lecturers, the staffs of stores that will be holding up the norens, and press. First, Masayoshi Boku, the representative of the nihonbashi β project and a creative team, Bascule Inc., took the floor as a modulator for the orientation. Masayoshi Boku, the representative of Bascule Inc. and the nihonbashi β project

Boku would often come to Nihonbashi for movies and shopping being it close to his house. Two years ago, he held an illumination event in Nihonbashi that linked natural phenomena and technology which he happened to propose by himself. Holding the event strengthened his feelings towards the town and started to learn about the local culture which had a great history. Boku told us the meanings behind the project name: “In the foot of Nihonbashi Bridge, there is a sign called the Douro-genpyo which marks the starting point of roads in Japan. This is a proof that Nihonbashi was a place where many people and events came and went, but I want to also connect it to the future. However, the town of Nihonbashi has a complete feeling and an image that it is difficult to approach as if mediocre things would not be accepted. We named this project nihonbashi β in order to be open to new challenges and to encourage young creators.”

Boku, then, stated about the future visions of Nihonbashi which he hopes to realize through this project: “I want to increase the number of people who take on new challenges in the town of Nihonbashi. And change the perception that the people outside of the town has. I hope to create an atmosphere that there is always something happening in Nihonbashi and to foster creators who grew in Nihonbashi.” After his presentations on future prospects, it was announced that a leading textile manufacturer, Toray Industries, Inc., will be joining the project. Toray Industries, Inc. holds its headquarter in the Nihonbashi Mitsui Tower where the venue of that day was located in. This meant an additional reassuring collaborator that could provide textiles needed to make Mirai-no-Noren.

Towards a New Nihonbashi while Preserving the Old

What are the histories behind the town where the norens created by the creators will be upheld? The event was followed by a presentation on the history of Nihonbashi by Shohei Shinhara of the Mitsui Fudosan Co., Ltd. who have been working on the urban development of Nihonbashi for 7 years.

“The current bridge at Nihonbashi was built in 1911 which is about 100 years ago. About 1 million people gathered for its opening ceremony. The first generation of the Nihonbashi bridge was built in 1603. Out of the towns in Edo, Nihonbashi had a strong centrality for its location and spiritually. This can also be observed from the fact that Nihonbashi is featured in many artworks of towns made during the Edo period. Also, as the starting point of the Gokaido, it was a town that had functions as the center for logistics and transportation; a town where people and things gathered bringing about economics, culture, and entertainments. Many people and things outside Edo concentrated in Nihonbashi. To that extent, the town was highly competitive. “If you’re caught napping, you’ll be replaced by the competitors. To survive, you need to challenge in making new business models; or else you would be left behind in time, and the consumers will turn away. However, such challenges create energy. For instance, Nihonbashi was the first town for kimono fabric stores to transfer to department stores.”

However, the business conditions were not well all the time. The town has experienced great ups and downs. “Together with specialty stores, stock companies and financial institutions gathered at Nihonbashi which had active businesses. However, such vigor started to decrease with the collapse of Japan’s economic bubble. From around 2000s, movements to bring back energy to the town started. The town development is in progress with the concept of ‘preserving, reviving, and creating.’” For such movements, 4 keywords for the town development was thought out. “Industrial Creation,” “Neighborhood Formation,” “Community Development,” and “Water Metropolis Regeneration.” Aiming towards developing a prosperous town through creating connections between people and creating a new community. This project started with such an aim.

Noren is an interface to connect the town and its people

President Katsuyuki Takatsu of Ninben Co., Ltd. which is one of the companies participating in the project gave a presentation that encouraged young creators. Following his presentation, panel discussions by the participating lecturers were held. The lecturers included Akinori Goto (artist/designer), Yuima Nakazato (YUIMA NAKAZATO), Yugo Nakamura (tha ltd.), Mariko Nishiura (HEART CATCH), Naonori Yago (SIX), and Yasushi Yamazaki (JDN). Individuals who are currently active in the creative business shared stories on the theme of “making Nihonbashi a creative town,” “long-established stores & innovation,” and “the concept of noren.” “Nihonbashi has old-fashioned and state-of-the-art buildings and is a mixture of new and old. Indeed, the town has an image of elegance.” (Goto)

“I am pretty familiar with Nihonbashi as I often go to the Coredo Muromachi on the weekends to watch movies. But, for a person born in Hokkaido, Nihonbashi feels like the center of Japan.” (Yamazaki)

“I believe that noren is an interface to connect the town and its people. Originally, there was a culture of wiping one’s hands with the noren. A dirty noren is a certificate of stores that are doing well.” (Boku)

“My favorite noren is Toraya’s noren in Tokyo Midtown, Roppongi. Its noren is a bit longer than normal noren, and the difference in its proportion gives a sense of something new. Even small changes in the mindset for regular familiarized noren can create surprises. It may be a good idea to re-realize the noren which Japanese people perceive unconsciously.” (Nakamura) “I have been long working on advertisements for Laforet Harajuku. I take my work as one way of town development, thinking of the meanings and effects of having the advertisement in that area. It can be related to a noren as it is displayed in front of each store. Designing advertisement not only has graphics element but also the element of visual communication. When designing, I very much often think about what image would be given to the people. That is why I would like to think about the meanings behind the noren rather than just the shape of it.” (Yago) “Curtains are made together with windows, but norens are made of materials that are very soft. It is closely related to the actions of people going through it, which can also relate to the existence of shoji (paper sliding doors). Norens are one of the decorations to partition off space with soft material, and it’s a very interesting function of architecture. The degree of dirtiness also becomes a sensor that tracks whether people passed through.” (Nakazato)

“Noren can be translated into ‘short curtains’ but there isn’t a specific word that could signify a noren in English speaking countries. It may be interesting to dig into Japanese people when creating the noren.” (Nishiura) After the insightful panel discussion that gave the participants a wider knowledge for proceeding with the project, the teams for the participating creators were announced. The creators were divided into 4 teams which considered the balance of each individual’s specialty and field. The combination of the team and stores which they will make the noren for was decided by a drawing by each representative of the stores. Such results by chance may also be an important factor in shaping the future. At the social gathering after finishing the programs, each participant deepened their friendship with each other, foretelling stronger teamwork towards the next workshop. The “Mirai-no-Noren” project created by young creators; it became a night that raised the excitement to what kind of communication it could trigger. The Theme is “OFF TO MEET” And They Have a Message for Modern Society. 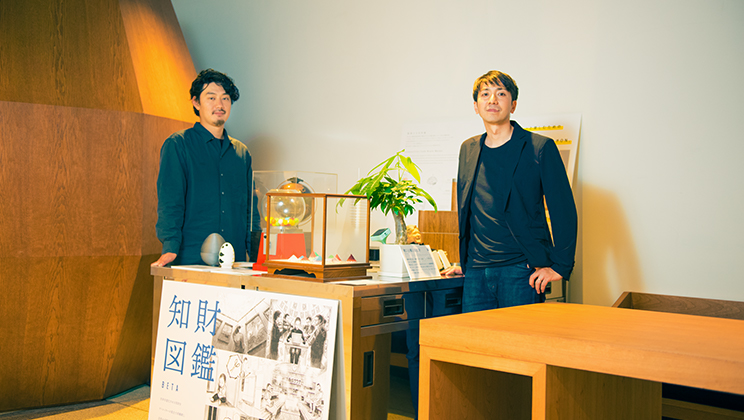 The City is the Ultimate Field for Use of IP: The Nihonbashi of the Future, as “Chizaizukan” Envision It.

Setting Aside Minor Rules for Substantive and Free Communication.
The City of the Future, According to the Iwasawa Brothers.